How to be Good

How to Be Good, published in 2001, is by my client, Nick Hornby, your honour . His story is that of Katie Carr, MD, and her husband, David Grant, the self-styled "angriest man in Holloway". It starts with her affair and almost Freudian slip of a request for a divorce.

But instead of the expected arguments, David goes to a spiritual healer, DJ GoodNews, who removes his anger and replaces it with a naïve, muscular do-gooderism. GoodNews soon moves in and encourages David and by extension his family – Katie and their two kids, Tom and Molly – and then their neighbours to take in the homeless. While Molly sides with David, as she did before GoodNews' laid his healing hands on her and took away her 'sadness', Tom refuses and sides with his mum, seeing it all as crock.

David works with GoodNews on a book, "How to be good", but while this fails to materialise, Katie's situation and take on family life are different by the end. 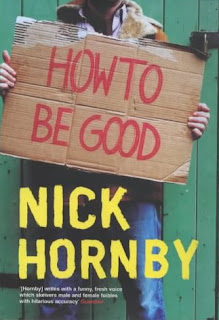 "Having established the promise of the scenario, however, it seems that Hornby does not quite know where to take it. The homelessness project fizzles out before it has really got started, David's faith in GoodNews wanes, and when Katie's self-examination threatens to be something darker, more destructive in the manner of, say, Hanif Kureishi's Intimacy, Hornby pulls the plug on seriousness and deflates her despair. Her story thus ends a little unsatisfactorily, drifting between social comedy and the mundane compromises she makes to preserve faith and love. You might say that, by the end, the questions this engaging book opens are too big for the lives it describes." – Tim Adams, The Guardian

"''How to Be Good'' is replete with Hornby's trademark wisecracks, aperçus and put-downs[...]But in the end, this oddly retro novel is hamstrung by the unequal contest between Katie and GoodNews, and by Katie's monotonous hand-wringing. ''High Fidelity'' and ''Fever Pitch'' grabbed the reader by the lapels because the narrators -- the record store owner and Hornby himself -- while slightly touched in the head, were true originals. Katie Carr, Hornby's marionette in ''How to Be Good,'' is a far less entertaining M.C. She is the kind of intelligent, practical woman who builds first-class societies but second-rate novels." – Joe Queenan, The New York Times

A Nick Hornby book set amongst North London Guardian readers. Hornby, you can get away with it once, twice, and just about three times, but this is too much. I'm itching to sentence you just for that. You should write about what you know, so I'm giving you 200 hours community service outside of Holloway so you can get to know other bits of BritCit. Don't worry, you'll be protected from most juve attacks. Hope you have your own body armour as we're all out at the moment.

You wrote this in 2001 but even by then it must have seemed dated with late-1990s references to 1-2-3-4 Get with the Wicked, 'crazyily down with it' lady vicars, and fretting about comprehensive kids who ought to be more loveable in principle then they really are.

But those aren't the worse sins. It's the lack of story, the picking up and dropping of themes, and generally ambling like a senior citizen in a motoped that infuriates me most. And I get infuriated easily. GoodNews is a poor pun on a a non-religious Gospel. Yet it never gets anywhere past one convert, David, and no real guidance. The How to be Good within How to be Good is never really shown and so it's never sent up or discussed. It's a plot device.

Unlike your other books Hornby, you rely too much on tell. And Katie does tell, mainly to us the readers and Judges, but also to her one-dimensional non-listening friend. As a Judge perps tell me a lot of things, but I need evidence and it's in desperately short supply here. As such, you fail miserably.

Automatic five years hard labour for reminding me of Richard Blackwood's existence. Add a further four in the isolation cubes for depending on telling over showing, and a further three for slipping for previous good form. You also used a very flimsy pun with GoodNews, so we'll round it up to 15 years.

But where do you think you're going Hornby? I'm not done with you yet – I've many other of your books to deal with. You're going back into the holding cells.
Posted by Judge Kritic at 15:48