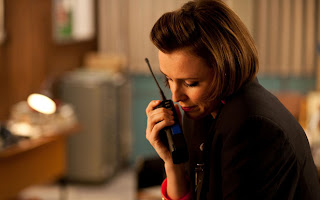 This week the team discover that there's an undercover officer working on their patch - and she's not under Gene's command.

Louise Gardner has been sent to infiltrate told gangster Terry Stafford's operations and Gene has it out with her commander, DCI Wilson for pissing on his patch. Alex has a bad dream along the way and Chris calls investigating officer "guv" in front of Gene.

"This fourth episode was on the whole more in keeping with the quality of last week’s episode more than the barnstorming opening two instalments. That’s to say it was a good to very good episode, but not quite Ashes To Ashes firing on all cylinders." - Simon Brew, Den of Geek

"Dan Owen regularly says that the crime stories need more work on Ashes To Ashes because they make up the bulk of each episode. In this instance, I totally agree." - Gerrard McGarry, Unreality Shout

Do you think I was born yesterday, Pharaoh? I know what you're trying by making Chris call Jim Keats guv, but it was as realistic and in-character as a witness statement at 3 in the morning on a cold holiday.

Your habits are getting predictable, Pharaoh, and that's fine by us judges observing you before your inevitable incarceration but I think the civilians want something more. In a Bit of Punt and Dennis (currently languishing in the isolation cubes by the way) they spoofed old war films. Their MO was to  introduce a new character, let him tell his tale, usually one involving marrying his sweetheart on his safe return, and then declaring "dead!" The same could be said for new characters in Ashes to Ashes who throw themselves on the team's protection, or have something to prove, only for them to be another corpse sent to the resyk plant. All relevant characters are introduced in episode 1 of a series. All the others die. If only judging was that simple.

However, some characters survived who I wish hadn't. The police complain about overwhelming redtape, DCI Wilson must spend his time reading Shakespearian soliloquies and practising his pontification. No judge on my precinct has time for more than a "freeze, creep!" on the best of days, let alone in the midst of a string of junkie deaths.

Investigation still pending but I'm in a generous mood. 5 years a piece added to the current bill.
Posted by Judge Kritic at 11:40 No comments: