It's 1962 and the world is starting to become aware of the mutants in its midst. Charles Xavier, newly created professor (or just lecturer?) at Oxford University is drafted by the CIA to help investigate mutants. Abandoning his scholarly work, Prof X soon shows himself as a man of action and recruits other mutants, including holocaust survivor Erik Lensherr – Magneto.

With the US and USSR squaring off over the Cuban Missile crisis, it's all due to the machinations of former death camp doctor Shaw and his team of mutants, their plan to devastate the world to let mutants, under Shaw, prosper. The X-Men disagree. 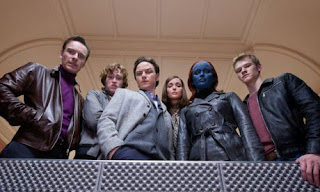 "First Class embraces a few embarrassing clichés: the few non-Caucasian characters are all dead or evil by halfway through the film, and a handful of already-ridiculous lines get infused with operatic, laughable portent that clash with the movie’s otherwise more humanistic take on the superhero genre. But First Class largely does what it sets out to do, by turning out another crowd-pleasing comic-book film designed to bring in new fans while gratifying the old ones." – Tasha Robinson, The AV Club

"X-Men may not take your breath away - director Matthew Vaughn is a kinetic director but he lacks personality and still can't handle emotional beats - but it has enormous pulp watchability. It also wins bonus points for not bothering to shoot in 3D." - Siobhan Synnot, The Scotsman

X-Men 3 disappointed – 30 years in the cubes for the production team if I recall – but that's not to stop Hollywood since the discovery of the reboot. First Class is meant to be set in 1962 but bar a few tape-to-tape computers and Emma Frost's fembot dress sense, and Prof X paying for a beer with the equivalent of a £100 note, there's not much to suggest that this is then. Even the Cuban Missile Crisis and the USSR does little to make the atmosphere 1960s – the tweed and rollnecks are more retro than original. After studying the Ipcress File and Bond films in the archives, this just doesn't match up.

I dislike superhero films out of principle – every time one comes out, another bunch of juves square up to the Judges thinking that a costume makes them invincible. A nightstick to the head soon dispels that idea. This one goes at a good pace and overall lacks the cheesey dialogue of most films. The set pieces are well done and it avoided 3D, putting their money in script work it seems.

Comic book adaptations are more hit than miss. Or in terms of the Justice Department, more cubes than seats are dished out. First Class isn't up to the Oxford brilliance of Professor Xavier, but it has put in a steady effort. There's also a reprimand for obvious use of trope - black man dies first.

However, I'll issue notice Vaughn, Turner and Singer – you've been warned about the franchise collapsing. Do this and I'll make an example of you. You've been warned.
Posted by Judge Kritic at 14:44