Your Honour, The Hour is a new serial set in the BBC of 1956, following the career of rising news star Bel Rowley (Romola Garai) as she is made producer for a new programme, also called The Hour. She is joined by an earnest Freddie Lyon (Ben Whishaw) as a principled, indeed, rather too highly principled, reporter, although it takes a good few interviews and prods to get him in with them.

Fronting the programme is married ladies-man Hector Madden (Dominic West) who waste no time flirting with Bel, piquing Freddie. However, there's more to The Hour than office and sexual politics. An Egyptologist is murdered at a station and Freddie sniffs out something more than a simple stabbing and MI6's name is soon bandied about.

Freddie's unconventional ways of getting evidence are not just limited to bribing the police (not, I hasten to add Your Honour, an encouragement any should try to corrupt a Judge) and being friends with a debutante who seems to know more than a little something about the late Egyptologist. She too is found hanging by Freddie.

Bel's problems, are of a more worldly nature and soon discovers that controlling Hector may take up a lot of her time. 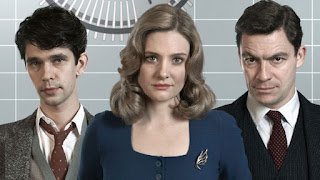 "A love triangle in the early BBC was not deemed sufficient attraction, however. So an extraneous thriller plot has been rudely inserted into the mix. A brilliant academic is nastily murdered by being stabbed in the throat. A blonde deb (Vanessa Kirby) who may have been the prof's lover comes to warn her old pal Freddie that there's a conspiracy afoot. Then he finds her hanging from the shower, while a sinister chap lurks on street corners doing the Standard crossword as a broad indication of occult intelligence. What can it all mean? That the producers didn't have the confidence to do it straight, without this melodramatic underpinning, I'd say.

"Nor for all the creditable suitings and sets, have they found a style other than that of the usual period costume drama, camping it up." - David Sexton, The Evening Standard


"It isn’t Freddie’s pomposity I mind, so much as the drama’s. At times it appears to be less a story than an exercise in upbraiding the past for failing to live up to the politically correct ideals of the 21st century.... I wouldn’t want to give up on The Hour too soon. Abi Morgan, its creator, wrote 2003’s Sex Traffic, which won eight Baftas.

"Maybe next week’s episode will jettison the waffle about broadcasting and prejudice, and turn into a gripping thriller focused on Freddie’s mysterious murdered man. I hope so, but I have a bad feeling we’re in for more 21st-century sermonising. 'You know, we really oughtn’t to be smoking all these cigarettes – we’re creating a cancer timebomb. Oh, and do stop patting my bottom, sir, or in 55 years period drama audiences will look upon you most unfavourably.'" - Michael Deacon, The Telegraph

Touted as a 'British Mad Men'? Well, it has suits and smoking, I give you, and period soundtrack – you can't miss that, it's so loud it and consistent it obscures most scenes. But in terms of characters and story? No, in fact, I'm giving Morgan and Kenley-Letts a year for false representation.

On with the findings. Well, to start with Freddie's continual calling Bel 'Moneypenny' for no real reason bordered on making viewers think that was her name, and the historical inaccuracies of missiles in 1956 Russia is sloppy. Add six months to your sentence, Morgan.

But the most infuriating finding is that Freddie is just not sympathetic. He's meant to be principled, but bribing an officer for information is not good at the moment, and his principles are pontificated and pompous, not sympathetic. He didn't even try to save his debutante friend's live after cutting her noose (from a shower head – 1950s Britain must have built them a damn sight stronger than anything since).

As for the plot... I think there was one but forensics are still examining it. There's a TV show starting, and a conspiracy by the end of the programme, but it takes a long time getting there. Unlike me and my sentencing.

What did I tell you? Justice is swift. The Hour was turgid and dragged, and obsessed with the USA – apparently BBC news in 1956 only focused on America. This just highlighted the many flaws in the programme, from unsympathetic protagonists to making something exciting dull, and just too little believability.

To sum up the programme: worthy and turgid. To sum up the sentences: life. Take them away.
Posted by Judge Kritic at 13:31