I give you Annie (Kristen Wiig), whose already depressing life sinks deeper when the bride's most recent 'best' friend, Helen (Rose Byrne) resents that a childhood friend should have the privilege of being maid-of-honour.

Annie takes her position as well as a broke and lovelorn girl can, but where her life seems pretty bad before, it gets worse – before long she's organising a meal that leads to explosive diarrhoea, sparking a panic (and air marshal) on a flight and destroying a bridal shower. Not only that, but she spurns the advances of a genuinely nice guy, Officer Rhodes (Chris O'Dowd) in yearning of use-them-and-lose-them Ted (Jon Hamm).

But when bride, Lillian, goes missing, it's not long before Annie steps in to save the day. 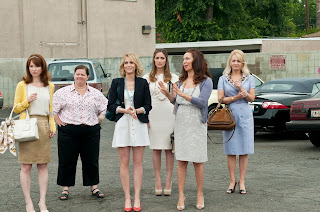 "As Annie, Kristen Wiig, the film's co-author, is wonderfully good, able to behave quite crazily without being so exasperating that she loses our sympathy. It's her film and it's going to make her a star.

"Vomiting and diarrhoea jokes are not entirely new nor perhaps the apex of Western civilisation but the routine here, already famous, is destined to be a classic of its kind, the reference point. If you are going to do the uncontrollable emissions thing, having your sufferers, who have just ingested an "authentic" Brazilian meal, dolled up in bridal wear in a super-expensive all-white boutique, with just one loo, is a pretty good start - and they sure make the most of it." – David Sexton, the Evening Standard

"[T]here is something in Bridesmaids that is particularly interesting: how it offers a male, or male-seeming dimension that is not featured in all the other sugary girly-romcommy treatments of engagements, bridal showers, wedding ceremonies, etc: the world of status-envy and career-disappointment. It is the women's relationship with each other, and not with men, that is central.

"Obviously, Bridesmaids does resemble the Hangover template a little: one Bridesmaid, Megan (Melissa McCarthy) is in the Zach Galifianakis role. It's not exactly groundbreaking, but what's striking is how fresh and unusual the comedy looks." – Peter Bradshaw, The Guardian

Chick flicks and Judges don't have a great history. Just check out the Sex & The City girls in the Black Museum at the Grand Hall of Justice. It's been known to make even some Cadet Judges turn pale.

The first half of the film is well-scripted, but during the second half I found my finger twitching on my lawgiver's trigger. The first half was relatively tight, but in the second characters were dropped and some scenes went on just a bit too long. Case in point, the 'freak out' scene at the bridal shower. Likewise, the drive-bys as she attempts to get love-interest Rhodes' attention, while funny, should have been kept tighter.

In addition, she dropped two characters, the newly-wed friend and the tired-mother friend, in the second half, making me wonder what she was doing having them if they went nowhere, particularly after some strong setting up for greater things in the first half.

Despite this, it's a well written film with a believable love-interest and moment of triumph that makes up for the other unbelievable parts.

Mumolo and Wigg, you sail pretty close to the wind in some parts, particularly in the second half. If you can cut this film from 2 hours 5 to 1hour 50 I will let you go without warning. Despite that, I think you have potential and that my judgment or your next film will be more positive.
Posted by Judge Kritic at 14:40