America's Most Hated Family in Crisis & My Brother the Islamist

Two programmes in the space of a few days deal with what to many is an alien phenomenon – people who, devote their lives to God (or Allah) and letting everyone who isn't with them just why they're going to hell.

Louis investigates the infamous Westboro Baptist Church (WBC) - nominally Christians, but going by most of their comments, not a Christianity anyone else would recognise. As one protestor asks in the video – "did you think Jesus died just for you?"

Louis had been there before, for the 2007 documentary The Most Hated Family in America and returned to find how the 'most hated family' had changed – including the casting out of daughters by fathers due to what most would see as minor transgressions. Louis played the bewildered outsider who would never understand the cult's teachings, and they didn't seem to keen to take him on (or even one potential convert).

Robb, by contrast, was bewildered but not an outsider as his subject, Salahuddin, formerly known as Rich, Robb's step-brother. Both grew up in Weymouth but one day Rich read about his brother as being one of the extremists following Anjem Choudary, the 'mad mullah' who wants sharia law in Britain. This was odd to Rich as just a year before he had gone on a holiday to the Med together, presumably for the usual sun, booze and birds.

Now he was protesting military funerals and calling for adulteresses to be punsihed. Like the WBC, if you aren't with them you are against them and they want nothing to do with you other than let you know just how utterly wrong you are. Like the WBC, it cut up families – by the end, Robb could not take that his step-brother would only shake with his 'unclean' left hand. Not all converts were this distant - 17-year-old Ben (Ahsan) and his relationship with his mother, although not broken, was a another aspect to the documentary.

Despite being about two different religions, the style of interviewing – very much background, and letting the subjects peak for themselves – and topics of religion and family (and sanctimony) showed more in common despite the surface differences.

Both focused on people who saw problems in their world and turned to men who gave easy, un-nuanced answers – Fred Phelps (WBC) and Anjem Choudary (Islam). Of course, I hasten to add, the Chief Judge and the Judge System in no way falls under this and it does answer all life's problems. 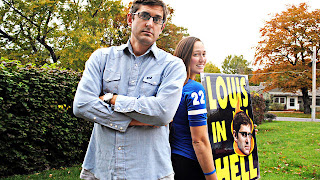 "There was a mixture of bafflement and sadness in his voice as he tried to get his head around being told the young Muslims he’d encountered through Salahuddin, all perfectly welcoming, could never truly be his friends until he converted to Islam.

"That was never on the agenda and, by the end of his film, Robb and his stepbrother were as far apart as they were at the start." – My Brother the Islamist - Keith Watson, The Metro

"Despite their perverse attitude to proselytising, it is impossible not to conclude that the Phelpsites love publicity of any description. Theroux has given it to them in spades – many sects, convinced of their own invincible rectitude, can only dream of two hours of largely unchallenged primetime television. No wonder they welcome him. If there is a next time, he ought to take a theologian with him who might penetrate their carapace of biblical certainty and challenge them on their own ground." – America's Most Hated Family – Stephen Bates, The Guardian

"[Robb] Leach followed Salahuddin to east London, to find out what had turned him, within six months of converting to Islam, into a loudspeaker-toting fundamentalist. He didn't really reach a conclusion, but he did meet other converts preaching global jihad, including 17-year-old Ben, another white boy from Weymouth. That they reminded me strongly of daft Barry (Nigel Lindsay) in Chris Morris's sublime dark comedy Four Lions did not, alas, make them remotely funny." – My Brother the Islamist - Brian Viner, The Independent

"The "in Crisis" bit of the title turned out to be a bit wishful. Yes, a couple of members had managed to escape the lunacy and appear to have survived intact. But their departure had only stiffened the resolve of the faithful who – however close they'd been to the heretics – stuck to the party line that God knew exactly what he was doing and would take his revenge for eternity. The group also now have a weird line in bilious pop mash-ups, adding lyrics of venomous religious piety to chart-topping hits. One hopes that the younger members might still be saved but for the elders who continue to feed them poison the suggestion painted on an opposition poster seemed most appropriate: 'Drink the Kool-Aid already'." – America's Most Hated Family – Tom Sutcliffe, The Independent

At first I wondered why the Mega City Prosecution Service brought both of these cases together to be tried – one's about  Grud-and-man bothering Christians, one about Alluh-and-man bothering Muslims. True, it's an archaic case as religion's no longer allowed – we have enough crazies without adding Grud to the mix – but on close examination I can see why.

Both documentary makes are restrained and let the subjects speak on their own, even if it were me or another Judge they would have a very long list of questions to answer under interrogation. Both groups, both fundamentalists, were nice enough individually (subject to any crimes they may have committed, I haven't investigated them. Yet) but as a group hateful. Both protested against soldiers, and told others that hell is the coming price of their disbelief. Wish I was there, they'd see the cubes as their punishment soon enough.

Both groups of perps were doing their best to work the primitive 21st internet and media to their advantage and encourage others to hate in their own special way. Already there are so many crimes that this should be a summary case against them – they're easily looking at isolation for the rest of their lives, with the potential for cryogenics to ensure that they do not escape their just punishment with death.

There were differences between them of course. The WBC had women as active as the men, something the Muslims did not approve of (so add sex discrimination to the charge sheet). My Brother the Extremist also had some more nuanced members than the WBC group, even those who left. The Muslims too were keen on converts, while the WBC wallowed in smugness as their belief of being the elect. While they both seemed to be keen for the Apocalypse, the WBC came across as so shallow that it was almost all it wanted – one of the subjects herself said she 'hoped' it would be soon.

Of course the overall difference is that My Brother the Extremist was more personal that Theroux's investigation, and Theroux's ignorance and unchallenging tone was a pain, while Robb's could be seen as someone who wanted to remain with his brother.

As I said, the charges against the subjects are so obvious that there's no need for a defence for them, they're already being prepared for isolation.

Theroux, you have mitigating circumstances for wanting your subjects to speak out, but by descending to their level by giving your beliefs you then don't defend them or challenge theirs. This is bad practice, albeit not a custodial offence, so let this be a mark in your official government file.

Robb Leech, by contrast, your lack of challenging of the subjects appeared to allow you to gather more evidence against them and as such is excused. I want to see further evidence of your work, however, just to be certain.
Posted by Judge Kritic at 20:16