The dead walk! The Walking Dead began life as a comic book before being signed up to a limited run of six episodes to see if their was appetite for seeing the undead eat the living. There is, and there'll be 13 more episodes hitting our screens in October. This first series has introduced us to sheriff's deputy Rick Grimes first as he awakes from a coma to discover that the undead have mostly conquered the world and then on his quest to Atlanta, Georgia, US as he hopes to find his family.

The short (by US standards) series means that he's reunited by the third episode, much to the disquiet of friend and colleague Shane Callies, who had taken Rick's place as man of the family in more ways than one. The survivors include a range of mostly working-class to lower-middle class survivors based on a hill on the outskirts of the city. With minorities forced to live with racists, and the living desperate to survive, momentum comes from the human drama rather than any zombie-slaying.

By the end we discover that these are Type P & Type F zombies due to an infection of unknown origin that turns all who are infected into the undead in hours. With no city safe due to the sheer mass of zombies, the survivors are determined to find somewhere they can live in peace. 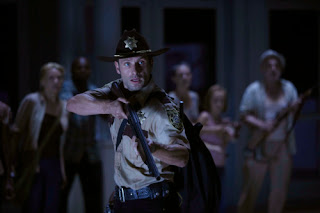 "Finally! We’ve waited so long – far too long – for a zombie TV series to arrive, and the quality of Frank Darabont’s adaptation of Robert Kirkman’s ongoing comic is such that it’s been well worth the wait... Our only disappointment is that the series’ initial order is just six episodes. IT’S NOT ENOUGH!

"Our only complaint is that six episodes simply ISN'T ENOUGH!

"The way the scriptwriters handle the character of Shane continues to fascinate." – Edited statements from Ian Berriman, SFX

"The more I think about it, the more I believe that the way the big writing shake-up of The Walking Dead staff is going to make or break the show. Although I might be overestimating the importance of the event, the exact nature of which is still elusive, it definitely looks like Frank Darabont wants to take a more auteur-driven approach to the show, working hands-on with all the scripts and only farming out stories to freelancers when absolutely necessary.

"I don't think we'll really be able to judge this show fairly until it gets the time to stretch in its 13-episode second season." - Leonard Pierce, The AV Club

Case for the defence is commended for using Comic, not Graphic Novel. Take away the pictures and you rarely have the kind of sound dialogue and character development that makes a good novel (and one year for Public Lechery for those who just complained that they'd miss the most common superpower).

This is demonstrated in episode Vatos by the comic's author, Robert Kirkman, which is by far the weakest episode. The series as a whole has weak dialogue and broadly painted characters, most of whom are barely seen and their names forgettable, but Vatos is the nadir. I'm expected to believe that hardened perps are really just nurses and porters looking after the aged, and that a simple couple of lines of dialogue can change everyone.

Despite this the series as a whole moved at a good pace – while Vatos had one character rescued in the same episode, another rescue was drawn over two episodes (or perhaps even series). The scientist and the Centre for Disease Control was rather clunkily done, and with a heavy dose of Exposition Computer.

My judgment is appropriate to a series on the undead – it's not a full reprieve, nor a full punishment. On the whole, the characters are pale, disposable and it's heavily signed when they are of importance. However, some such as Shane and Daryl stand out and will continue to generate interest. Likewise, the focus on the human drama over zombie slaying has stopped this from rotting in the schedules.

Yet some episodes have been clumsily done and the usual zombie clichés – relatives who won't slay their loved ones, people unprepared to fight – are there. That they have chosen to site themselves in Camp Sitting Duck with no defence nor weapons or training is a dissolution of their civic service. Judges know how to cope with zombies –start shooting and don't stop till the undead are dead.

Overall, I look forward to judging the second series. Case adjourned.
Posted by Judge Kritic at 15:36